The first portion of this review contains no major spoilers, while my comments on the individual episodes in the second half, will.

The first two episodes, or ‘chapters,’ of Stranger Things 2 unequivocally remind us that we identify ourselves by the media we choose to consume. When the characters are reintroduced, we’re nearly nostalgic for the first run of the series, which only aired a little over a year ago. The first series created an environment reminiscent of many of our childhood brushes with pop culture, adventure, the awkwardness of navigating puberty, etc. The second run nearly doubles down on recreating that environment from the get-go, and then as the series progresses the Duffer Brothers deftly ease off that particular pedal, and let us settle back into the day-to-day troubles of Hawkins without the distraction of a constant barrage of ancient product labels, toys, fashion, and music to take note of. 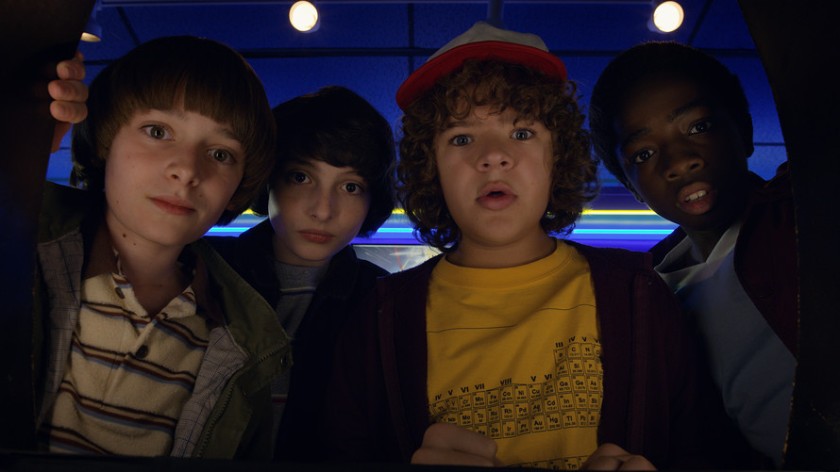 Stranger Things 2 is nearly a remake of the first series. Our heroes reemerge to once again take on the government lab baddies and its out-of-control science experiment, although this time the threat looms even larger over Hawkins. One would assume that replaying the same plot points might mark this series as stale, from the third or so chapter on, but the characters do grow, and there are enough mini-arcs involving our favorite returning heroes to maintain interest. For me, the first run of Stranger Things often dragged, while the characters did keep me watching. Stranger Things 2 certainly kept up the pace of the story, and only hit a road bump with Eleven’s side-story in the big city.

Speaking of which, I do have to address the opening chase scene, with the cast of characters we’ll only come to again in Chapter 7. There seems to be no purpose for introducing these folks here. The van chase should probably begin the fifth chapter, where the lead, Kali, is hinted at in a flashback. For me, Kali and her gang is the one glaring misstep of Stranger Things 2. Her Eleven-like powers are introduced in the first few minutes of the series, and the viewer is left waiting for some sort of explanation, or purpose for her in the story arc, yet the distraction has little to no payoff.

Before I get to comments on individual chapters, I must say that Stranger Things 2 is well done, a superior product to the original, if you don’t detest, or fixate on, the fact that this second series is nearly a soft remake. I’d recommend Stranger Things 2 to anyone who broadly enjoys sci-fi or horror.

The following portion has spoilers and should serve as a brief episode guide, so here’s your warning if you haven’t seen the complete series.

Max is a redheaded girl who is always at the arcade, the boys are instantly enamored of her and stalk her. Her older brother, Billy, quickly becomes the new, even more narcissistic and nasty version of series 1 Steve, now that Steve is a sweetheart, older brother archetype to the boys.

Barb’s family has hired a private investigator and are selling their house to pay for it, although Nancy and Steve know she’s dead, but won’t say. It’s a real moral dilemma for Nancy, as it should be. We figure out quickly that most of the characters have kept quiet about what occurred at Hawkins National Lab.

Eleven is living with Hopper in a cabin deep in the woods. 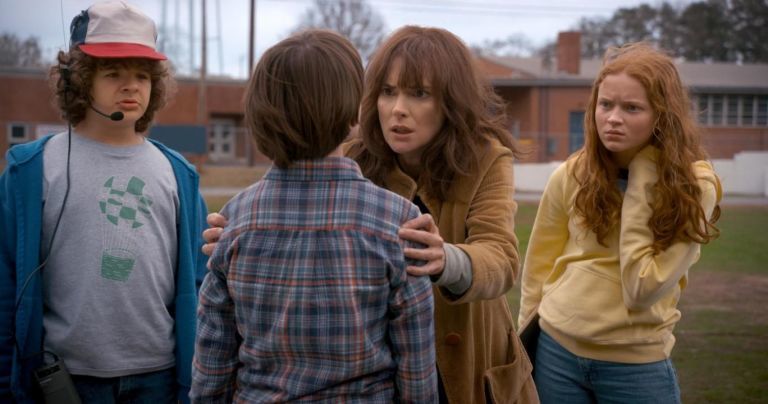 Eleven is still having visions, mainly to let the viewer in on the fallout from the previous season.

Hopper begins investigating poison pumpkins and vegetation. First major, “Come on, dude” moment. Hopper is only a year away from dealing with plant issues. The first thing he should think when he sees a field full of rotted vegetation is Inter-dimensional Plant Monster.

The boys go trick or treating with Max and have a great time until Will has a vision of a menacing behemoth in the sky. This is such a rich, nostalgic episode, although it doesn’t quite have enough trick or treating scenes as one might hope.

Dusty finds creature in trash can outside his house. The creature transforms and Dusty is a dummy who will smack himself (again) when he sees Life (2017).

El wants to leave cabin and see Mike, but Hopper wants to keep her his secret. This was probably a missed opportunity to have an ultimate Halloween episode with Mike and El’s reunion. She already had the ghost sheet made, there’s no real reason why she can’t just interact with Mike and have him keep her secret.

Steve’s hair is out of control. It’s distracting by this point.

Hopper figures out the lab is the cause of the plant decaying poison…duh.

Joyce finally gets back to her paranormal investigating and uses camcorder footage from Halloween Night to see Will’s behemoth in the sky.

El goes to the middle school just to knock Max off her skateboard out of jealousy. It’s not a good look, or a good scene.

Will stands his ground against the behemoth, taking Bob’s advice to heart, after he’s thrust back into the Upside Down, and gets consumed by the monster.

They find will nearly catatonic in the parking lot of school. Will is now possessed by the entity from his visions and begins coloring a ton of pictures.

El returns home and has teen tantrum, destroys the cabin and Hopper leaves. She then finds a box with Hopper’s notes on Hawkin’s Lab under cabin and gets ideas.

Joyce and Hopper put Will’s picture together and decide they represent destroying vines.

Nancy records Dr. Owens admitting to Barb’s death. She and Steve want to burn the lab to ground, which is silly at the point, because they already knew Hawkins National Lab was most responsible for Barb’s death.

Dusty’s creature has escaped, and is found eating his cat. The creature now looks like the monster from the first season.

Hopper discovers the vast root system and tunnels under the poisoned fields.

Hopper is investigating underground and gets blasted in face by sporing vine, and is trapped. Will has visions of Hopper in trouble.

Nancy and Jonathan meet up with conspiracy nut/the private investigator who was investigating Barb’s death and let him listen to Dr. Owens’ confession.

Bob walks in and solves Will’s drawings, deciphering them as a map of Hawkins, almost instantly.

El communicates with her Mom, finds out her Mom went into Hawkins Lab to try and rescue El aka Jane, and another girl, whom we can assume is the chick from first episode. El/Jane’s mom is caught, and Dr. Brenner fries her brain with some intense ECT.

Joyce and Bob manage to find, and free, Hopper. Hawkins Lab people also discover the underground tunnel system and they torch the labyrinths, which makes Will freaks out.

Dusty and Steve discover that the creature has escaped from Dusty’s bomb shelter.

Will gets amnesia, and the episode begins feeling like It (2017) with the way everything leads back to one, evil wellspring which must be approached underground and conquered.

At this point the show begins feeling more like a horror movie than a sci-fi adventure. The kids battle monsters in a blockaded bus, while Hawkins Lab is overrun by the demadogs and the adults must fight their way out of the building.

Eleven finds Kali, her lost ‘sister’ from Hawkins lab, in Chicago. They share information and decide they’re going to track bad guys. Their first target states that Dr. Brenner is still alive, Kali seems to believe him. This bit of incredibly important information is quickly forgotten.

Cops bust Kali’s gang, while El has a vision of Mike in trouble, and parts ways with Kali and her gang. There was no reason that Eleven had to meet Kali or take part in any of Kali’s vendettas. It cheapened the overall story and was a distracting element from the first episode onward. 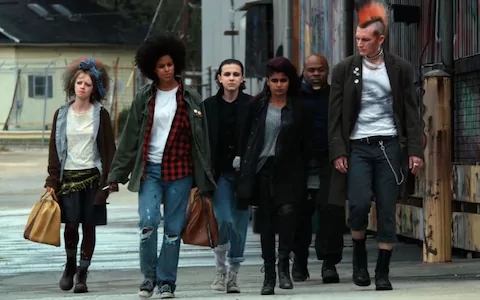 The adults are still trying to escape Hawkins Lab, which is overrun by monsters. Bob’s going to reprogram some computers on the fly and save everyone.

This is the episode where we go full horror movie, fun clichés spawning left and right. Bob dies, brutally to save Joyce and the others.

The group plan to kill the underground behemoth, in order to destroy the hivemind, it generates.

They need to get information out of Will, but he’s possessed by the behemoth. Will’s friends and family tell him loving stories and anecdotes, and he ultimately gives them no new information.

El returns in time to save everyone from demadogs at Joyce’s house. She took a bus home using the money which she and Kali’s gang stole, apparently.

Comedy finally returns to the series in the beginning of this episode! Yes, levity gives perspective, and character, to heavy drama.

The group separates to burn the entity that has possessed Will, and to take on the behemoth underground.

“I shouldn’t have left.” – Eleven. Exactly, she shouldn’t have had a side story about meeting her mom and sister, as they ultimately told her nothing about herself or gave her meaningful direction to overcome her demons.

El and Hopper go into lab and run into Dr. Owens, who’s given a tourniquet and pistol by Hopper. No real reason for this run-in to occur here.

Entity/behemoth ultimately leaves Will when Steve and his gang of kids start fire in the underground hub. While El defeats the behemoth and pushes it back through the gate.

Epilogue: There’s justice for Barb and Hawkins Lab gets shut down for good. Which is really a no-brainer as the entire structure and everyone in it got destroyed.

Hopper gets Eleven/Jane’s birth certificate from Dr. Owens, and she is now his daughter. The kids have a winter dance and hook up with each other. Final moments show Hawkins Middle School in the Upside Down.

Joe Sullivan is the author of spook books, available on Amazon, and a fully illustrated book of horror tales inspired by Scary Stories to Tell in the Dark, currently live on Kickstarter.