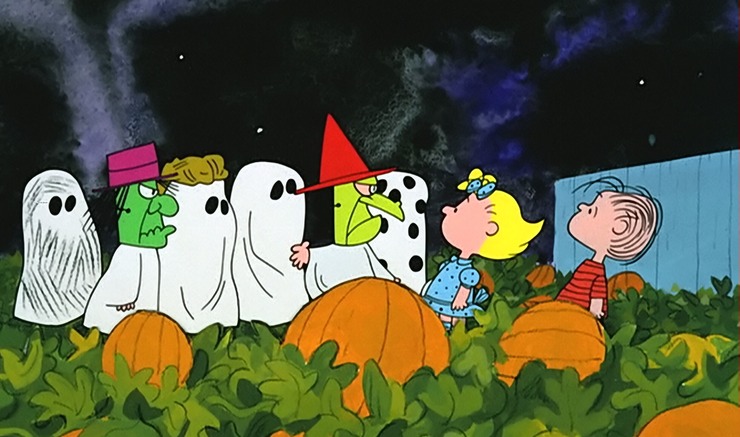 Halloween was the best thing ever when I was growing up, right up there with Teenage Mutant Ninja Turtles and playing “the floor is lava” with my sisters. I was ecstatic in the weeks leading up to Oct. 31, daydreaming of that crisp October night, the smell of pumpkin guts, the crunch of dried leaves beneath my BK Knights. It was an event; it was magical. And while I still love the heck out of the holiday, nothing can replace the joy that I experienced during Halloween as a kid. Here are just a few of the many things I loved about Halloween when I was growing up in the 80s and early 90s. 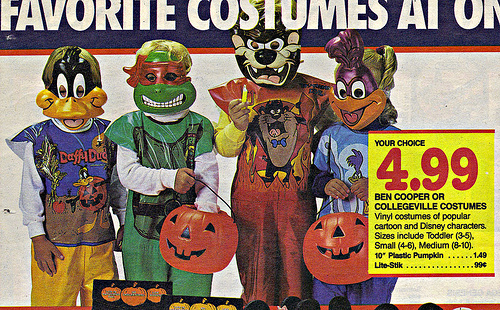 If you wanted to dress up like Hulk Hogan or Batman, or whatever character you were obsessed with that month, for Halloween, you got yourself a cheap plastic costume with an uncomfortable mask, with a rubber band that could dig a permanent scar into the back of your head. I sure did. The costumes rarely looked like the actual characters, but you didn’t mind. That night, you were Hulk Hogan, you were Batman. And I’ll be damned if I wasn’t as cool a Beetlejuice as Michael Keaton that one magical Halloween back in third grade.

These little, plastic pails practically embody Halloween for me. What could be cooler then, instead of taking home your garbage burgers and fries in a cardboard box, like you’d normally get with a Happy Meal, you got a little ghost bucket that you could trick-or-treat with? I’m not sure I even used them very often (they couldn’t really accommodate the massive amounts of candy that I so longed for), but they were still so cool to collect and fill with LEGOs and various bric-a-brac.

Things that glow are awesome when you’re a kid, right up there with holograms and light-up shoes. While these sticks were mainly meant to keep us safe while we roamed the streets at night, encumbered my masks we could barely see out of, for me they were just cool to stick in my trick-or-treat bag/bucket and add to the spooky ambiance. “Oooh, they glow.” Yeah, I was dumb.

What’s better than an episode Garfield when you’re a kid? Why a spooky episode of Garfield, of course! There’s something special (and totally not gimmicky) when your favorite TV show takes a shot at horror/scary for an episode or special. Garfield’s Halloween Adventure scared the crap out of me when I was little (that pirate scene still gives me the shivers) and I ate up spooky episodes of shows like Hey Dude! and Salute Your Shorts (Zeke the plumber, anyone?), even if they didn’t originally air on Halloween. And let us not forget the most nostalgic Halloween TV special of all: It’s The Great Pumpkin, Charlie Brown. I literally just carved a Great Pumpkin jack-o-lantern before writing this; it’s that good.

Who cares if they were usually stuffed with the candy that you didn’t really want (e.g. Tootsie Rolls, those little peanut chews in the orange and black wrappers). These little bags take me back, especially this specific design with the scarecrow on it. The feeeeels.

I can remember quite vividly walking through a makeshift “haunted house” on the stage inside my elementary school gymnasium and sticking my hand into these weird “feel boxes,” which were full of food meant to emulate creepy, crawly things. Are those real eyeballs?! Nah, just peeled grapes. Brains? Spaghetti. Teeth? Popcorn kernels. You knew they weren’t real, but it still felt pretty gross, nonetheless. And when you’re 8 years old, gross = awesome.

I haven’t listened to pop radio much in the last few years, so I’m not sure if this still happens, but I remember being so excited when FM stations started playing “scary” songs on Halloween. Where you might normally hear nothing but Paula Abdul or Boyz II Men, all of a sudden the radio stations were playing stuff like the “Ghostbusters” theme, Michael Jackson’s “Thriller” and CCR’s “Bad Moon Rising.” It was a little thing, really, but it helped get me even more amped up for the day.

Sure, I could go out right now and buy one of those $20 mixed bags of candy — I’m a grown-ass adult, sort of — but it’s not the same thing. There was something special about coming home from trick-or-treating with what seemed like two million pounds of candy, and sorting through the treasure trove. Reese’s Peanut Butter Cups and Kit Kats were like gold, with raisins and pennies (yes, people seriously gave us pennies) earning nothing but disdain.

What did you love about Halloween when you were a kid? Leave a comment and let us know!

John Brhel is the author of paranormal and fantasy books, available on Amazon, and a fully illustrated book of horror tales inspired by Scary Stories to Tell in the Dark, currently live on Kickstarter. Follow him on Twitter at @johnbrhel.