In February 2018, we (Brhel & Sullivan) will release a book of ten short stories entitled Her Mourning Portrait and Other Paranormal Oddities. With this collection, we aim to present the difficulties of sustaining flesh-and-blood relationships through a novel lens — through the weird and uncanny.

Paranormal themes and plot elements help us explore interpersonal relationships in unique, often amusing, ways; but at their core, these tales are not about ghosts or strange premonitions — they’re about flawed, everyday individuals navigating the complexities of dating, marriage, and loss. If anything, the strange situations that our characters encounter only parallel the seemingly arbitrary, uncertain nature of real-life love and companionship. And while you may not ever communicate with a dead lover or have a preternatural insight into a different time or place, you can likely relate to the tragedy, the euphoria, the insanity that the act of loving often entails.

The stories can be considered romances in the broadest sense. Each tale is built around a central character’s quest for a more secure, fully actualized, and loving intimacy. However, most of the stories would not properly fit within the expectations of the already established, paranormal romance subgenre.

With books like Tales from Valleyview Cemetery and Corpse Cold: New American Folklore our goal was to entertain readers with spook stories, featuring uncomfortable plot elements that approach real-life horrors. And in Carol for a Haunted Man we portrayed a helpful, Dickensian apparition, and a mortal protagonist who was struggling to rebuild his personal and professional lives. While this collection is a mix of both thematic styles, we hope to satisfy readers who’ve enjoyed our campfire oddities, as well as those who’ve preferred our more literary moments. 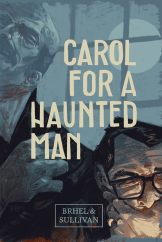 Some of the highlights from the new collection include:

Ben Baldwin is once again responsible for the cover art. Ben previously designed the cover for our episodic novel, Marvelry’s Curiosity Shop.

The following is a complete short story from Her Mourning Portrait and Other Paranormal Oddities, entitled “Beyond a Blood Moon.” It is a brief homage to the chillers of Guy de Maupassant and Edgar A. Poe.

“Beyond a Blood Moon”

I was awakened one night in bed, likely due to the absence of my fiancée; I can only assume that it was this silence past midnight, which a light sleeper can’t help but notice once they’ve become attuned to the constancy of their nightly bedroom environment. And this absence was likely what my unconscious found unsettling enough to stir me. Sara’s breathing was often measured, hypnotic, a comforting rhythm to my night. Her respiration was often the last thing I took hold of in my twilight mind before plunging into the great unknown, and then my first lifeline back to cognizance each morning. But when I stirred that night, due to the silence, and reached for her—I couldn’t help but convulse, considering a multitude of fears and possibilities.

I left the bedroom and wandered our home. Her sneakers were gone. She enjoyed jogging late, and I hated that she had no fear of the night. As I dressed and put on my shoes, I considered whether I was the reason for her jogging now; that she wouldn’t want to worry me if I were still awake, while she took the path around the block and through the cemetery. So, since there was no way I was going to fall back to sleep without seeing her safely home, I headed out into the night.

There were intermittent clouds, but the moon was full and bright, illuminating the areas where the amber-yellow street lamps fell short. As I turned from the sidewalk and into Valleyview Cemetery, I noticed the beginnings of a lunar eclipse. I hadn’t seen one since childhood, and stood in awe as the Earth’s shadow consumed the reddening lunar surface. At the time, I considered how strange and seemingly unimportant such a spectacular astronomical event had been to me. It had been over twenty years since I’d stood in my parents’ front yard and last waited for the moon to vanish.

I rarely consumed local media, but there had to have been some mention of it in the newspaper that morning. To think that ancient societies would plan for months, and even years, in advance, to celebrate a full lunar eclipse—and here I was, casually catching one as I searched for my missing companion.

I continued on through Valleyview after the blood moon had passed. The lunar disc retained some of its reddish hue, but the street lamps on either end of the cemetery were enough for me to find my way down the winding paths of the hillside graveyard. I came upon Sara, not far from the central outcropping of mausoleums. I ran to her crumpled form. I knew her instantly by the powder-blue sneakers with their pink bands.

She was lifeless. I screamed her name as I attempted to revive her. I could make out the strangulation marks on her neck, her bruised face, as I gave my best effort at resuscitation. She had been murdered. I’m still not sure whether she had been robbed. I called 911 and the paramedics, fire department, and police raced into the cemetery.

It was the last time I saw Sara’s body, as her family wouldn’t allow me at the wake or funeral, since I was awaiting arraignment for homicide.

I had no choice but to put my hands on her, and try my best to revive her. I had to touch her, feel with my own hands the bruising on her cheek, her broken right orbital bone, the sinewy strangulation marks on her neck. I began to mourn her, long before the first medic arrived on the scene.

There was no one else to charge, imprison, and punish. It really made sense for the police, community, my friends, and family, that I was the one who had extinguished a loving, generous, woman—one who I had long imagined as the mother of my children, my lifelong partner. For eight years I went mad in a single cell at Shawangunk Correctional Facility. I had no visitors, no one waiting for me—no one to serve my time for. I wrote letters to Sara’s family, my own family, pleading my innocence and the truth of my unabashed love for her. They went unanswered.

During my eight years, I married Sara in my mind, had children with her. We went on family vacations, advanced in our careers—even had spats, and differences, which we eventually overcame. She and I advanced into old age, and I was ready to die alongside her when I was granted parole.

The first night I was allowed to leave the halfway house, I went right to Valleyview and lay upon her ornate altar-tomb. It was a frigid, overcast February night, and I intended to fall asleep and become a part of her monument. A monument to my love for her, the love we had shared the four years we were together, and the eight I had shared with her in dream.

With my finger I traced her name in the granite, then the inscription beneath, which read: “Devoted daughter and fiancée, a beautiful soul taken too soon.” I shivered at the mention of ‘fiancée,’ that her parents left her connection to me at her burial site. It surprised me, and gave me some small consolatory pleasure in my waning hours.

The chill had already consumed me, and was now leaving my body along with my life’s energy. It began to snow. A thin, white blanket covered me and the altar, and I began to drift into that place between conscious and unconscious. But as I resigned myself to my end, and was preparing to embrace my final sleep, the altar moved beneath me. The shock of the tomb cracking mere inches from my face gave me a rush of adrenaline that left me fully cognizant of what then occurred.

From the few inches of darkness revealed by the cracked top piece of the altar, a waxen, partly shriveled hand emerged. I pushed myself onto my side to avoid the ghastly intrusion by my beloved. The aged, embalmed hand proceeded to scratch out the inscription on the tomb. I watched as an eerie incandescent green glow passed from the fingertips to the stone, bright enough that I had to momentarily shield my eyes.

It wasn’t half a minute before the task was complete, and the hand returned to the dark of the tomb, the altar gently scraping back to its settled position. I looked to the inscription, to see what damage had been done, but saw nothing out of the ordinary. I assumed I had experienced some sort of delusion brought on by my deteriorating condition.

When I lay back on the tomb, resigned to complete my purpose, I looked up into the overcast sky, and the clouds soon parted—revealing the Earth’s colossal umbra as it consumed the moon. I had no prior knowledge of an impending lunar eclipse, and I had to shield my eyes, as I was shaken to my core by the specter of the blood-red disc.

I turned away from the dreadful astronomical event, and when I did, I caught sight of the inscription on the tomb, which was now illuminated in a reddish hue from the heavenly body. Where the inscription had once read “Devoted daughter and fiancée; a beautiful soul taken too soon,” it now read, in an ordered (and what I can only describe as ‘angelic’) script: “Devoted mother and wife; to be together again, if only in dream.”

Preorder your eBook at Amazon!